In this topic, you learn how to identify aircraft currently on the ground at a selected airport to assess potential congestion and ground delays.

We estimate that this will take 6 minutes to complete.

Surface tracking is an optional feature and may not be deployed by all users.

Use N-Tracking surface tracking functionality to monitor the level of congestion at most airports or to verify if a particular flight is at its arrival gate.

Colors you assign to the fleet, tracked, and "other" aircraft help you visualize which airlines are using an airport at any given time. Flights remain on the surface map for 15 minutes after their last position report, making it easier for Ground Control/Dispatch to identify which gate the plane is occupying.

You can also display tail registration numbers to better analyze the movement of planes on runways and around the gates. 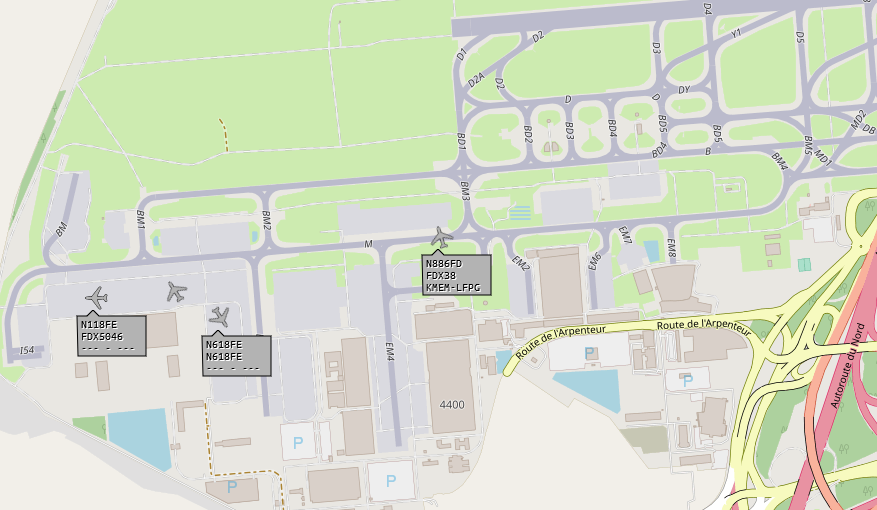 In addition to the functionality outlined at the beginning of this topic, you can now zoom in to the airport map on the main map. Most airport maps display at a zoom level of two nautical miles (2NM). For others (depending on latitude), you must zoom in further.

Other improvements include better visibility of the flight trail (contrasted against the gray runway) and the display of both surface and enroute positions on the airport map. Pre-departure positions received on the ground at the departure airport are seamlessly fused with the enroute positions. As a result, the flight position trail includes “gate-to-gate” positions, including pre-departure (taxi and take-off), along with landing and taxi-in. 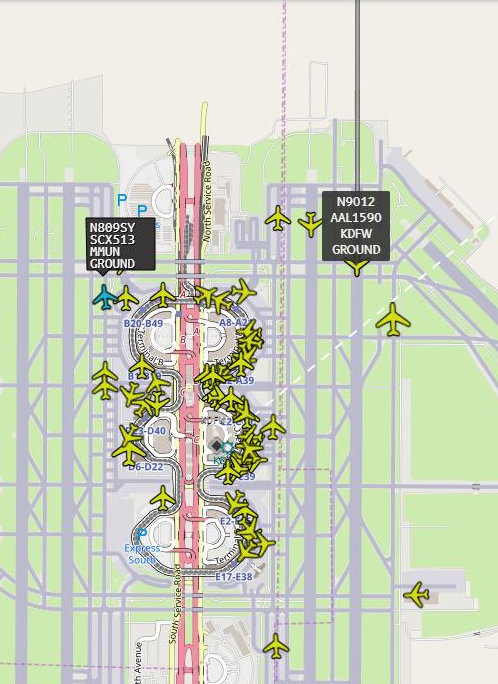 For this first example, access an airport map from within the Flight Details pane for a specific flight.

In a later example, you'll learn how to use the map with the same techniques, but accessing that map from the Airport tab.

These same colors depict aircraft on the airport map. 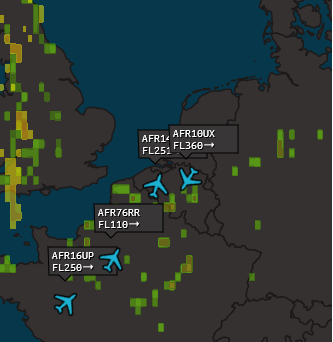 AFR14AR is enroute for the Amsterdam airport (EHAM). Let's see how congested that airport is.

While the Surface Map icon causes the airport map for the selected airport to display, you can click either of the city pair (departure and arrival airport) codes to navigate to the Airport tab for that airport.

For more details on the information available on the Airport tab, consult the topic, Search for airports. 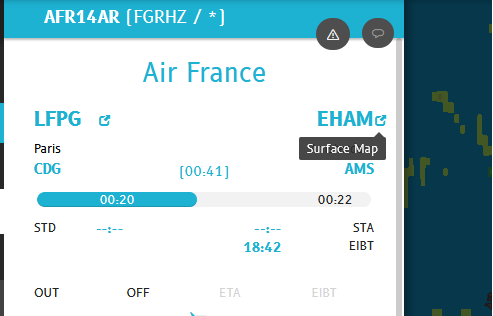 to view airport maps for either the departure or the arrival airport from the Flight Details pane.

For this example, use the arrival airport, EHAM(Amsterdam).

In this example, you no longer see the underlying N-Tracking map, but it remains active -- in exactly the same state it was when this new browser window containing the airport map opened.

In your operational environment, you do not lose connection with the main map. 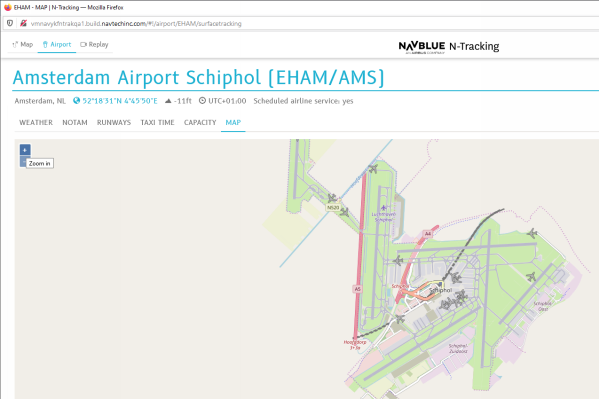 On the airport map, the zoom controls appear in the upper left corner.

By default, when you first access a map, you are at maximum zoom. You can zoom in for further detail, but you cannot zoom out at this point.

With the map positioned around the appropriate terminal (if there is more than one), zoom in far enough to see the gate labels. 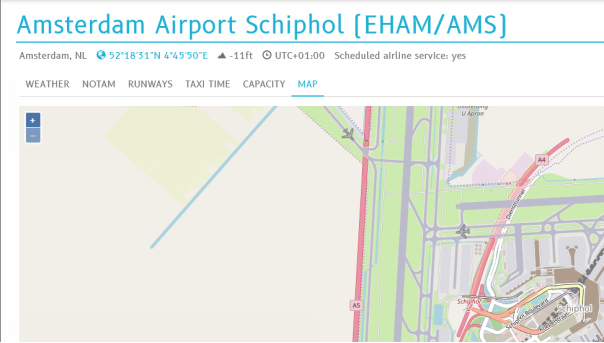 When you zoom in, you can see individual aircraft locations on the ground more clearly. With gate labels displaying, you can see relative surface traffic around all gates and which aircraft is at which gate.

Click +  as many times as needed to achieve the focus you want. 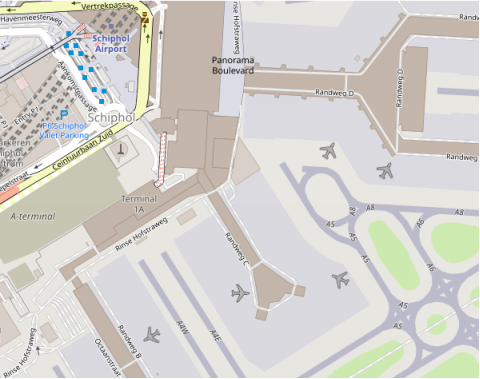 All the depicted aircraft are gray. The colors used to depict aircraft match those on the Flight list. In this example, these flights do not belong to the TRACKED category, but to the OTHERS category.

Click the icon of the aircraft near Randweg B. You can see that it is between gate B15 and B23. 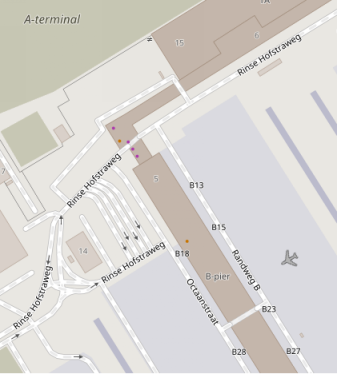 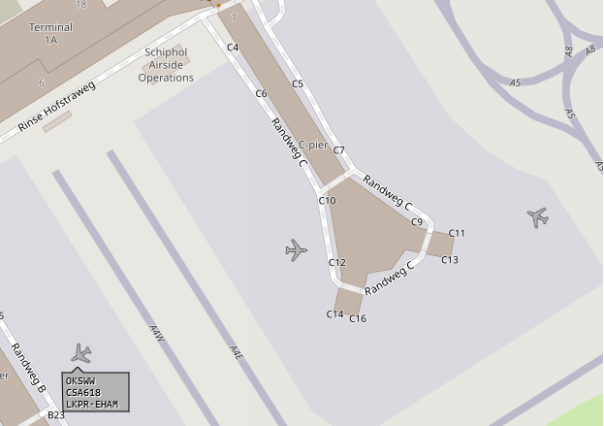 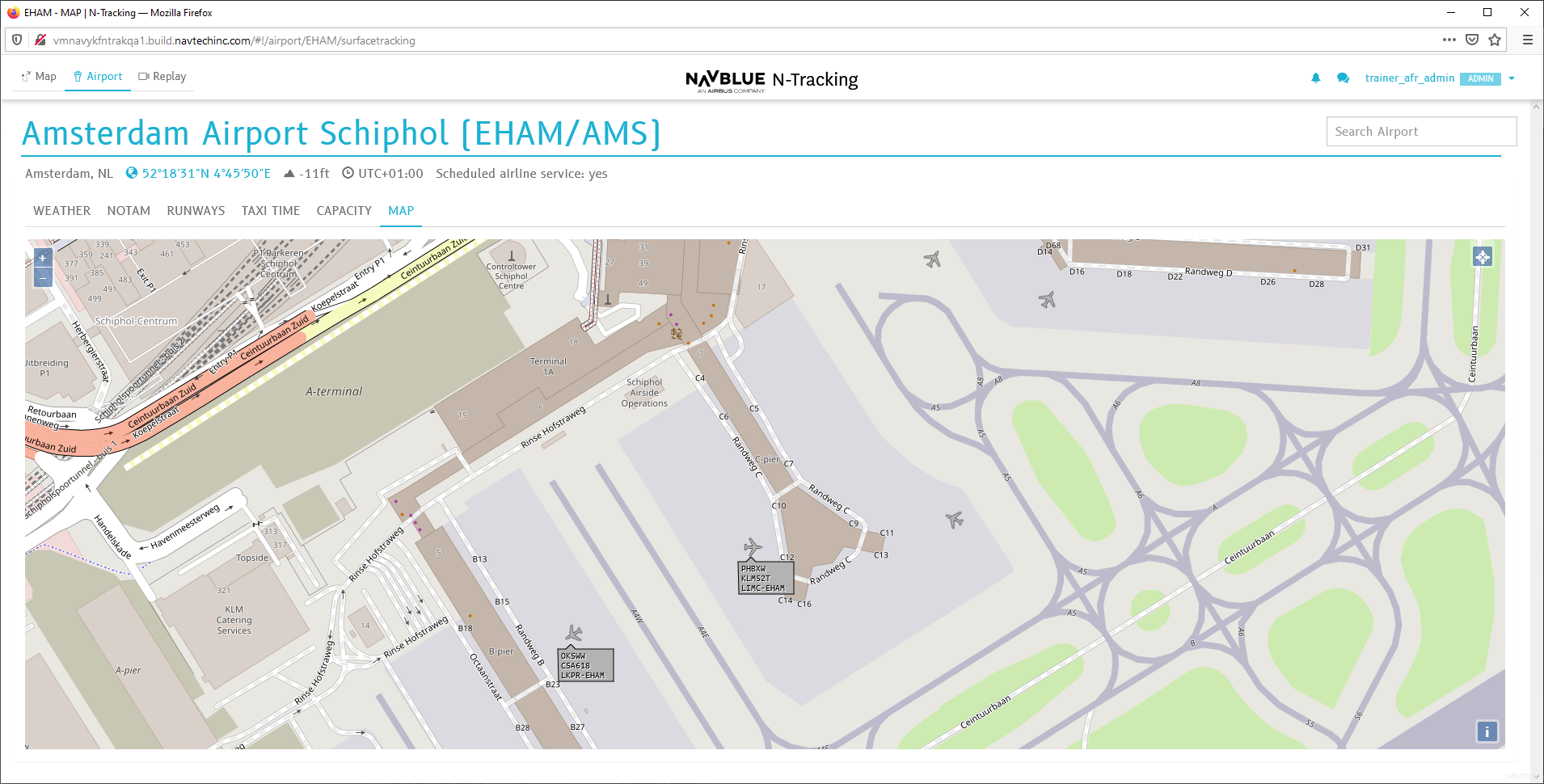 Registration numbers continue to display until you deactivate them by clicking the aircraft icon again or until 15 minutes after the aircraft's last position report.

You can display registration numbers for all aircraft, regardless of whether or not they are part of your fleet.

Next, click the icon of the aircraft near Randweg D, gate D16. 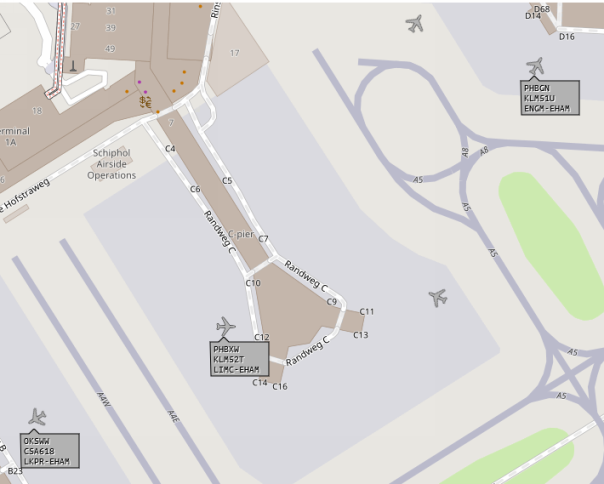 When the aircraft stops sending position messages after landing, city pair information no longer displays.  In all cases, the display of departure and arrival airport information depends on the information contained in the flight plan feed.

Optionally, you can zoom out to see more of the traffic and congestion situation at this airport.

Optionally, to center the map, returning it to its original position and zoom level, click the Center map button

in the upper right corner of the map. 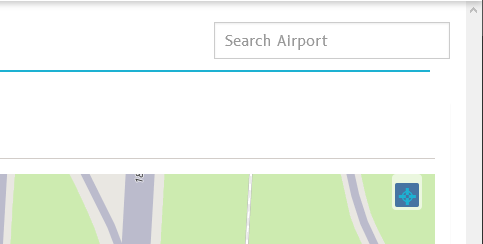 Next, explore the second method for accessing the surface map -- from the Airport tab.

Otherwise, enter the IATA code in the Search Airport field. 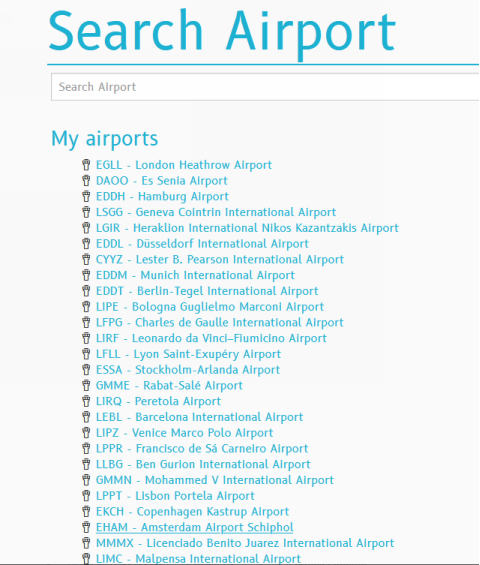 Approaching surface tracking from this point, your first step is to search for the appropriate airport or select it from My airports. 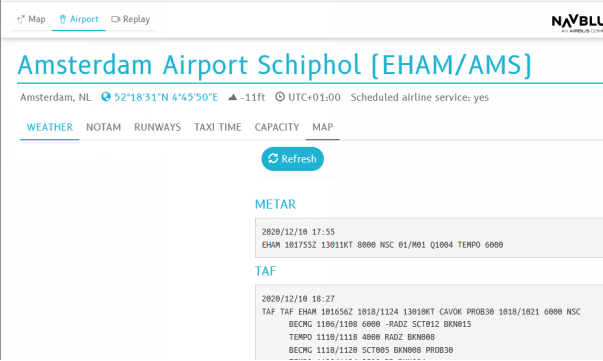 Weather information for the airport displays first. Access the airport map from the MAP tab.

From this point, surface tracking works exactly as you just learned.

Click the Map tab (beside the Airport tab) to display the main map again.

On the main map, review how you can zoom into the airport map directly from this map.

In this example, flight SCX3060 is approaching airport KTOL.

The current zoom level is 5NM. Zoom in further to see the airport map.

For the following function to work, you must have the Display Airport Surface Map option (User Settings > Map) selected.

For more details, review the topic, Display airport map (for Surface Tracking users only) in the User Settings section. 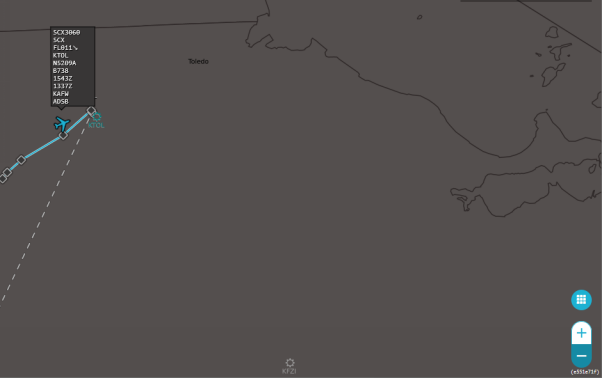 For this airport, the map does not display at 2NM. Zoom in until you see the airport map.

When the airport map displays, you may still need to zoom in more to see surface detail. 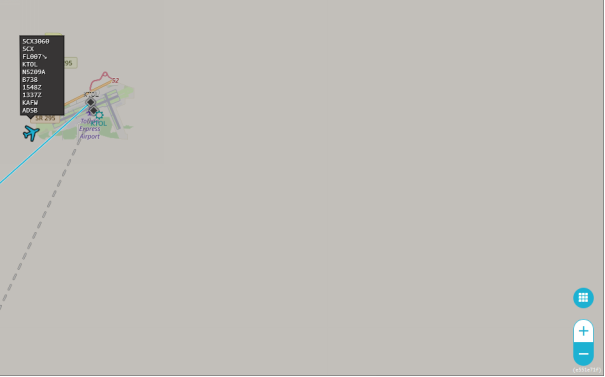 In this example, at the .1NM zoom level, you see the flight within the airport limits, but not yet landed. 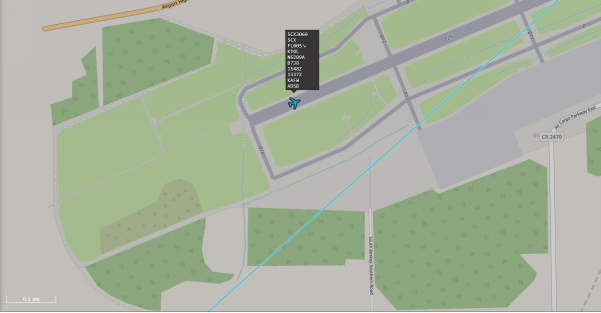 At the next position update, the aircraft shows as being on GROUND on runway 7-25. If this were a passenger flight, you would be able to monitor its progress over runways to its assigned gate, as described earlier in this topic. 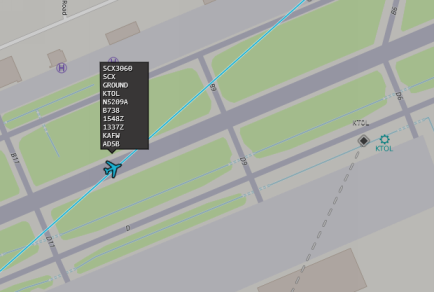 Congratulations! You have learned how to access surface tracking information in three ways:

- By launching an airport map for an airport identified on the Flight Details pane of a specific flight, or

- by opening the airport map from the Airport tab, or

- by zooming in on the main map until the desired airport map displays.

You can use this information to assess traffic at airport gates and to better advise ground personnel or flight crew.